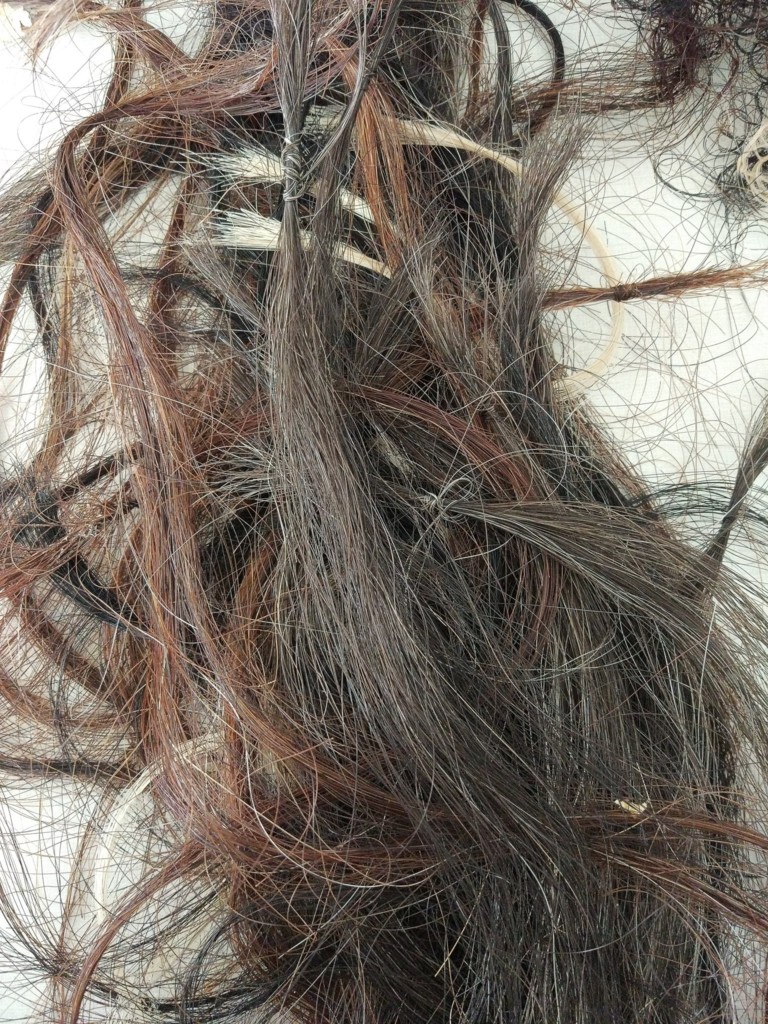 The opening scene is of the artist sitting on the floor with her back to the audience, her full red hair is the prominent feature. Next to her is a table on which there is pile of cut hair – horse hair.
Hair is one of the elements that attracts Belle Shafir to create art. It attracted her since her childhood in the family horse farm in Germany. Now it is a key motif of her art making.
In the past years hair became a part of her art as a intimate object through which she tells her story. The horse hair is the lines with which she draws on the floor; she caresses the hair and herself, welcoming the soft touch and the physical sensation of the art.
The hair lines are part of the body movement lines she performs very slowly, drawing attention to all the life movements one does not usually notice. The art of the hair line is now the narrator of Belle’s story.

In the early 2000s, I began dealing with issues that concern man’s interference with the natural order through genetic enhancement and cloning. The tiny pieces I created during that period address man’s inability to notice disruptions and deal with the harmful consequences of his actions. This artistic move has led me to examine my own identity, split in many ways and ridden with conflict, oscillating between cultures. Looming above it all, like a dark cloud, was the fact of my being the daughter of Polish holocaust survivors, who had immigrated to Germany at the end of World War II. Dealing with identity brought up some alarming memories which, previously silenced, were now piling one on top of the other. The essence and deceptive nature of memory became central motifs in my work. Knitted chains made from horse-hair taken from the family farm in Germany, reminiscent of damaged DNA sequences, were the first appearance of this theme in her art. I later used the same hair to knit tiny spiders that resonated with Louise Bourgeois’ “Maman”.
‍
During the recent year, I began to process the family collection of photographs, which has since become a Pandora’s Box for me. I recover images from its depths and confronts them by placing them on sheets of parchment, hoping to retell the story of my own life, and try to come to terms with the interrupted story of my family.
‍
As a multimedia artist, I translate all those issues through drawings, paper cuttings, video art, animation and performance.